Warning Your internet explorer is in compatibility mode and may not be displaying the website correctly. You can fix this by pressing 'F12' on your keyboard, Selecting 'Document Mode' and choosing 'standards' (or the latest version listed if standards is not an option).

The following are some examples of our work using COMSOL Multiphysics®:

Thermo-Hydro-Chemical Assessment of Dolomitization for the O&G Industry: Basin-Scale Study

Numerical study using 3D reactive transport modeling of porosity evolution in a carbonate reservoir through dolomitization. The model is based on a currently producing carbonate reservoir with large regions of high porosity values deduced through seismic inversion. Using an embedded model approach, the geochemical reactions in the reservoir have been coupled to the thermo-hydrogeological behavior of the entire basin. 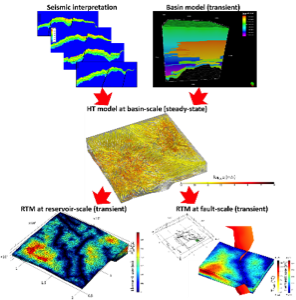 Schematic description of the workflow for thermo-hydro-geochemical processes.

A planned in situ experiment for CO2 injection into a shallow fault was simulated using multiphase flow models and explicitly accounting for chemical reactions between injected gas and the carbonate system and for the geomechanical impact of the injection process.

Shear stresses in the fault near the injection borehole.

The geochemical evolution of bentonite barriers for spent fuel disposal during the transient thermal period was simulated with iCP, an interface between COMSOL® and PHREEQC. The model included thermo-hydro-geochemical coupled processes during the saturation of the barrier with groundwater while heat is released from the waste contained in a copper canister. 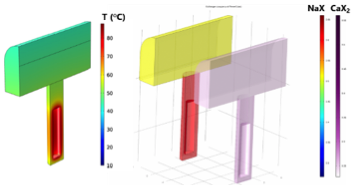 High temperature around the waste and cation exchange reactions in the bentonite buffer.

Nanoparticles injection in subsurface has emerged as a novel technique for contaminated groundwater remediation. The fate of these particles in the subsurface was predicted by developing a particle transport model in COMSOL®. Predictions were made of the concentration of ZVI nano-particles after injection into an aquifer with sand layers with a range of permeabilities. 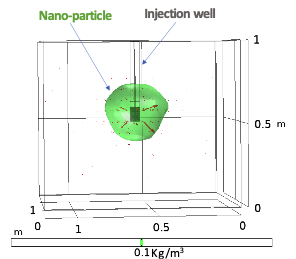 Isosurface of 0.1 Kg/m3 for the retained nanoparticles in the sandy aquifer. Red arrows: flow field of water injected through the well at center of the aquifer.

Hydro-Chemo-Mechanical Processes in the Mining Industry

Heap leaching, a metallurgical process to extract metals from ore recovered from underground mines, was modeled with COMSOL®. The model was based on soil mechanics and explicitly included the impact of groundwater flow and mineralogical reactions on the dynamics of the system. 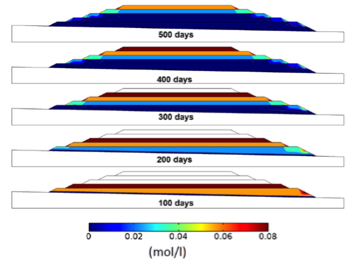 Mineral rich in copper simulated along the operation time.

3D modeling of the transport of a dissolved radionuclide in a fractured media represented as a set of hundreds of 2D planar surfaces with different lengths and orientations. The model accounts for convection, diffusion, and retention processes such as sorption, chemical reactions, and radioactive decay. 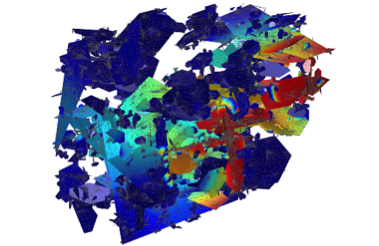 Spatial distribution of a nonreactive pollutant dissolved in water.

Modeling Radionuclide Transport and Retention in the Near-Surface 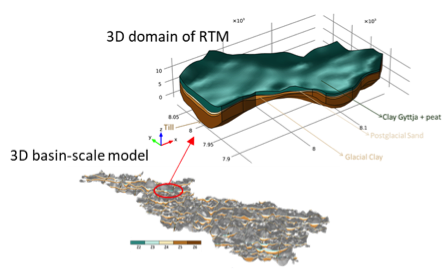 Geometry and geological layers of the 3D basin-scale model.

Hydro-Chemo-Mechanical Study of the Durability of Concrete Structures

Quantitative assessment of concrete durability of the underground structures for disposal of low- and intermediate-level waste in Sweden. The study focused on the long-term hydro-chemical processes and their potential impact on the mechanical stability of the concrete structures. 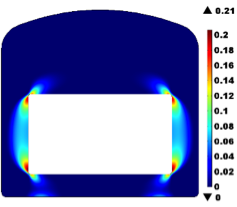 Mechanical damage (-) in a vault cross section as a result of glaciation-induced stresses and calcium leaching. 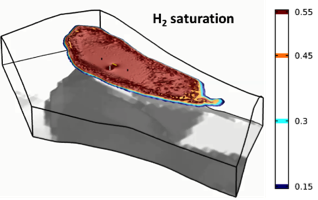 Hydrogen degree of saturation during injection and extraction cycles in an underground energy storage facility.

The flux of an anionic radionuclide, Cl36, escaping a bentonite barrier of a repository vault for future disposal of long-lived low- and intermediate-level waste, was quantified by means of five different diffusion models of anionic species through compacted bentonite in COMSOL®.

Assessment of the effect of different cement types and concrete mixes on the long-term performance of a repository vault of the future SFL repository by means of reactive transport simulations and thermodynamic modeling of the hydration of the different systems. 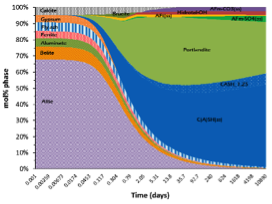 Cement hydration as a function of time, used in reactive transport simulations in COMSOL®.

pH in the sealing system and swelling pressure distribution.

Elastoplastic models coupled to fluid flow were used to assess the potential of a mining operation in an existing landfill of municipal solid waste. All available data regarding the hydraulics of the system and geomechanical tests were integrated in the model.

Multicomponent Gas Flow in Shale for the O&G Industry 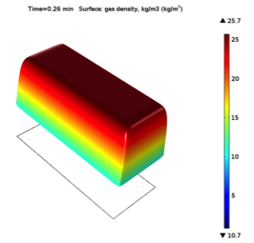 Metallic ores mines in heterogeneous fractured massifs can impact the streams and lakes and change the natural water balance. Quantification of these impacts by 3D modeling of fractured porous media was performed to assess the sustainability of the construction and operation periods.

The future hydraulic behavior of the SFR repository in Sweden under saturated and steady-state conditions was studied to determine flow values used as input to radionuclide transport calculations. 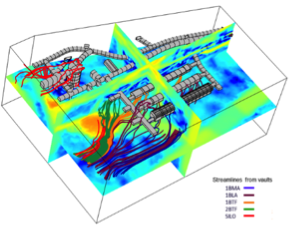 Groundwater streamlines leaving the vaults and hydraulic conductivity field of the rock.